The following information is for the EMANT380 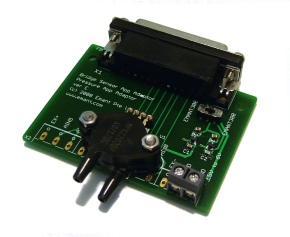 The Pressure Application Adaptor is used with the EMANT380 Bluetooth DAQ module to measure pressure. Its features are

The MPX2202 series device is a silicon piezoresistive pressure sensor that provides a highly accurate and linear voltage output - directly proportional to the applied pressure. The sensor is a single monolithic silicon diaphragm with the strain gage and a thin-film resistor network integrated on-chip. The chip is laser trimmed for precise span and offset calibration and temperature compensation.

In our adaptor design, the sensor is excited at VEXC=3.3V. Since the excitation voltage is 3.3V, the full span output is scaled to 13.33mV. When the input of the EMANT3x0 is set to this range, the module can measure better than 1uV due to its programmable gain amplifier and the resolution of the ADC.

Thus the pressure in kPa with respect to the voltage output VO (seen at the differential input AIN4, AIN3) is given by