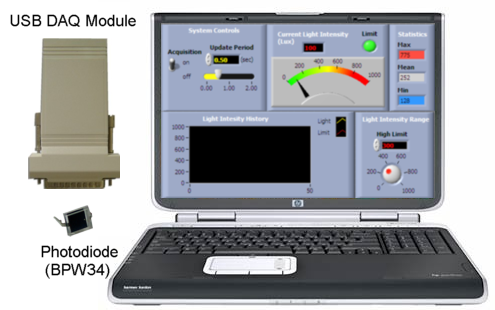 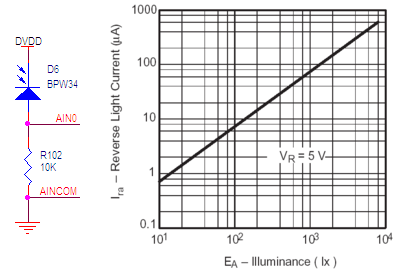 The light sensor used is the BPW34. A photo-diode is designed to be responsive to optical input.

Photodiodes can be used in either zero bias or reverse bias. Diodes have extremely high resistance when reverse biased. This resistance is reduced when light of an appropriate frequency shines on the junction. Hence, a reverse biased diode can be used as a light detector by monitoring the current running through it. Coupled to a 10Kohm resistor, and given the specification of the BPW34 a simple relationship between lux (light intensity) and voltage is given by

With the Data Acquisition Module (DAQ module), a regular computer can now be used to measure this voltage. The DAQ module contains an 24-bit ADC (analog to digital converter). During analog to digital conversion, a digital value can correspond to a range of analog values. Any analog signal within the zone of one least significant bit (LSB) will have the same digital value. This error is known as quantization error. The relationship between this error and the bit resolution is given by

For an 24-bit ADC operating over a 2.5V range, the accuracy you obtain cannot be better than 2.5/16777216 V or 0.15 uV. However due to noise, this is only achievable through careful wiring. In a typical application, a noise floor of about 18 bits or 9 uV is usually achievable.

The DAQ module (EMANT3X0) has up to 6 differential ADC channels, one 8 bit current DAC channel, 8 digital I/Os and either a 16 bit PWM or a Counter. These inputs/outputs are connected to the outside signals/sensors through the DB25 pin connector.

EMANT3X0 DB25 pin out connection to the real world

The DAQ module is connected to the PC via the USB (EMANT300) or Bluetooth (EMANT380) port of the computer. 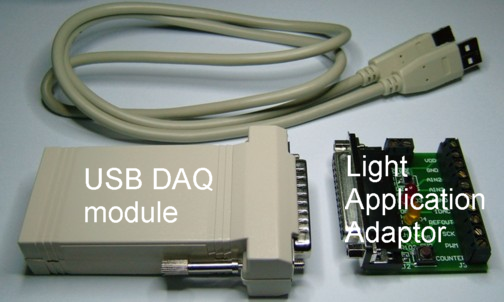 The Light Application Adaptor for the EMANT3X0 has the following connections

In the early years of computing for Engineers, FORTRAN was a popular language. With the introduction of the PCs, Pascal became the language of choice for many programming classes in Engineering. This was followed by C, Visual Basic and C++. All these programming languages have strengths in different areas. Some (like C++) are powerful but difficult to work with while others (Visual Basic) are simpler but limiting in functionality or performance. Visual Basic was originally created to make creating graphical user interfaces easy. Visual Basic .NET is a very capable object oriented programming language that retains some of the easy to use features of the earlier versions.